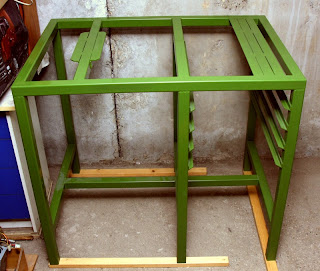 I asked a friend of mine to create a stand for my SIEG C4 machine. He has a big professional workshop, sometimes I also help him in designing and creating different electronic controllers for his older machines. It took time, but finally the new stand arrived! I don't want you to know how the former temporary stand looked like, although it would have been useful to take a photo of it saying: that's what you should NEVER do! It was an old kitchen table strengthened with a few pieces of wood taken from old chairs. The new one is massive, made of 40 mm square steel tubing with 3 mm walls, the upper cover is 3 mm steel sheet. 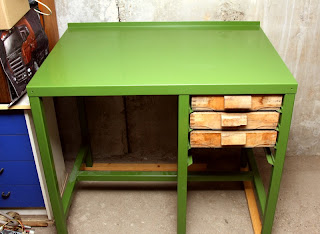 You can see additional L shape steels weld on the horizontal stays, they are intended for the machine's fixing screws. Later I realised that I should design them a bit closer to the front of the stand (or full length as they are on the right side) for better handling comfort. Each leg has an M12 nut weld at the bottom, and will have adjustable shoes when the floor reconstruction will end in my basement. Until then it will stand on the wooden staves. The stand also have wooden drawers for the smaller parts. It's far better to take out the accessories from the drawers than thinking of where I left.them last time... 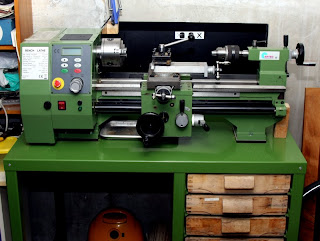 And finally the big moment came: the machine is fastened onto the stand. I put 10 mm thick bakelite sheets under the machine at both sides, on one hand to have bigger clearance under the gear train door, on the other hand I thought it may be useful to have something between the table and the machine. It really was, when it turned out that the table is not perfectly plane, so I played with polishing the bakelite sheets accordingly. The table was carefully adjusted during welding, it was assembled on a big thick plain steel surface, but such a thing can never be so exactly plane. I fastened the screws on the spindle side, then put a dial test indicator to have some information about the eventual torsion in the bed structure when fastening the other end. Of course this indicative type of measurement tells nothing more than torsion happened or not. 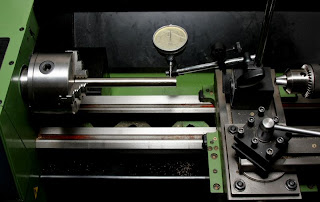 It moved 0.03 millimeters, so I played with the bakelite sheets until the torsion was eliminated. Maybe it's not so important considering the accuracy of other parts, but I prefer doing things as precisely as I can.


Finally arrived: Milling attachment for the C4 lathe, see the corresponding post!
Posted by Gabor BENYHE at 8:15 PM No comments: